“No matter how much pain they cause you, how much misery they pile up on you, they only win if you give up.”

Sawbones, also known by her real name, Aria Vaughn, is a scavenger in the Garden. Her default vambrace power is Heal.

Whether she’s trying to reach an ally or to make her escape, Sawbones can rapidly travel across the garden and can promptly recover from her encounters with the hunter. Sawbones is also highly resistant to the hunter’s melee attacks.

Aria Vaughn ran a clinic in the ruins, healing those she could, easing the pain of those she couldn't. Her settlement was raided and she vowed to fight back, but warlords are powerful and merciless. Vaughn's counterattack was crushed, her friends were murdered and she was thrown into The Bloodharvest as punishment.

Her spirit remains strong, she won't be defeated; she'll win her freedom and return to the ruins, where she can continue to do good for those who need her most.

How do you run a clinic, with no resources and very few staff? Aria Vaughn had managed to keep hers going for the last six months, with only the Nanoparticle Ink (NPI) that could be recycled from scavenged relics of the war.

Her clinic served a small community that had congregated around the wreckage of a Collective armored column, which they had been slowly dismantling and recycling into raw NPI. But the recyclers were inefficient, the yield low, and the column of those arriving with injuries, disease and malnutrition seemingly never-ending.

Since the founding of The Enclaves, Vaughn had seen enough death and suffering for a hundred lifetimes. She had lost those close to her and had vowed that she would do all that she could to prevent others from having to go through that pain.

One night, she was awoken by the sound of fighting. The unit of the local warlord, Rhaelyn Green, was attacking the settlement, to steal the NPI they had spent so long collecting.

The community did their best to protect the resources that were their lifeline, but the Unit was too strong and well-supported. Those who weren't cut down within moments were were put to rout, and Vaughn watched in horror as those she had helped were murdered around her. The smell of blood and propellant filled her nostrils, the flashing of gunfire illuminated the darkened scene in snapshots of carnage. A shell detonated nearby and she was knocked to the ground, then buried by collapsing masonry.

The cool morning air snapped her back into consciousness and her weary arms dug her free of the rubble. All around was death and destruction, her little community ruined once more.

That morning, she made a new vow: that this was the line, she would steal their resources back from Rhaeylen Green and rebuild what they had lost.

She quickly toured the wreckage of the settlement, rallying what support she could find. When she had a small group, they struck out into the woods, following the trail of Green's unit back to their base. They waited for darkness, listening to the laughter as the unit recounted their horrific actions to the rest of the troops at the base.

Night finally came and the base went quiet. Vaughn and her small party crept quietly into the camp, splitting up to scout for the stores. Finding the NPI stockpile, they formed a human chain, ferrying the boxes out of the camp, taking back what was rightfully theirs.

The sky started to brighten and Aria Vaughn was about to call time on their endeavor. But the camp's lights abruptly switched on, the gate slid shut, cutting the human chain in half, and Rhaelyn Green herself was standing before them, armed troops all around her. 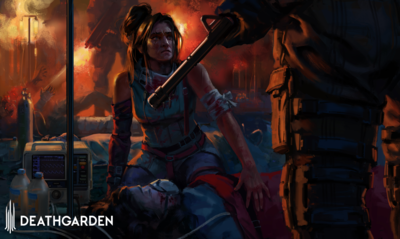 Vaughn and her helpers were brought inside and lined up, then pushed down on on their knees. Rhaelyn Green walked casually up and down the line.

"Who is the leader of this ill-advised expedition?" she asked, No-one made a sound.

"If the leader comes forward, I promise that I'll only punish them. All the rest of you can be on your way. I've no real desire to dispose of twelve bodies."

One of Vaughn's helpers began to get to his feet, but she put a hand on his shoulder and stood herself. She stepped forward, looking Rhaelyn Green in they eye.

Green sized her up. "I know who you are," she replied, "you're the local doctor. Far too valuable to kill, I'm afraid."

She nodded to a guard, and the rest of Vaughn's cohorts were dragged away to their deaths.

"Don't worry," Green continued, "you'll not get away scot-free. You still need teaching a lesson on what happens to anyone who tries to steal from me. A spell in The Bloodharvest should suffice; I have contact with Divided Hunters who will give you special treatment."