"I had no choice but to enter the garden—to hide my secrets in the only place where my enemies wouldn’t follow."

Inked, also known by her real name, Aiswarya Kumaran, is a scavenger in the Garden. Her default vambrace power is Shield.

Inked is a battle-hardened scavenger. She’s not one to shy away from challenges and isn’t afraid of soaking up a few bullets in the garden.

Her strength and ability to find hiding in higher places allows her to save herself and survive. She’s now ready to face the hunters.

In the past, Runners used biometric tattoos, to make them faster, stronger, better. AIshwarya Kumaran wanted to return to those days, developing her own methods and technologies to help Scavengers against the Hunters.

When her allies turned on her, wanting to keep the tattoos for themselves, she fled where they would not follow: into the Deathgardens. If she can beat the Hunters, she can win her way out of the country, escape her pursuers and use her tech to help others get into The Enclaves.

In the days before The Enclaves, Runners would augment themselves with biometric tattoos: designs created from conductive ink, implanted electrodes and tiny, sub-dermal, processors. Any Runner who had them installed would be quicker, stronger, and better able to counter a Hunter's attack.

That was when resources were plentiful and Runners were participating in a game. Now Scavengers consist of the desperate and the condemned, and they are only provided the bare minimum of what they need to participate.

Aishwarya Kumaran, resident of the ruins near Chennal, sought to change that,

She had been apprenticed to a local doctor, who was part of The Gauntlet before the Hunters took over. Until he was killed in a raid, he has told her as much as he could about the technology that Runners had previously used, including biometric tattoos. She was certain that she could recreate that tech, to help increase the chances of people entering The Gauntlet today.

However, the information that the doctor had provided was not enough and she also needed reliable technology, if she were to make any new advances. 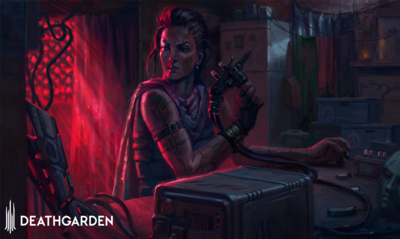 She struck a deal with the Prakabar brothers: ex-Runners who had biometric tattoos of their own. The brothers ran the local Run to Win outfit, one of a worldwide system of training houses, which claim to be able to train up any potential Scavenger, increasing their chances of success in the Deathgardens. While Run to Win does provide a little training, they demand large amounts of resources in payment and many families have sent themselves into destitution to help put one of their number through the program.

The deal Kumaran made was that she would have access to the brothers' tattoos, along with those of some of their old connections, as well as any appropriate technology that might be brought into Run to Win as their customers' payments. In return, she would provide access to her research, so that they could offer tattoos to their customers. For a price, of course.

After long months of work, she tried out her technique for the first time on a willing volunteer. She drew the tracks in his flesh, pushed in the electrodes and connected the jury-rigged processor. The read-outs on her meters registered a signal flow. Kumaran got her guinea-pig to try the training course and his times were improved by 50%. It had worked!

One night, soon after this first success, Aishwarya Kumaran was awoken by a sound outside her door. Someone was trying to pick the lock. She could hear the hushed voices of the Prabakar brothers, arguing over how best to open the door.

She had long anticipated this outcome, expecting that, as soon as she had completed her work, the brothers would try to kill her, steal her research and monopolize the new technology for themselves. As the only Run to Win outfit to have the capacity to create biometric tattoos, they would be able to charge any price they wished.

Slowly, the door to her lab was opened and she heard the sound of her papers being searched. She slid from her bed, quietly opened the window and climbed out. As she disappeared into the night, she knew they would follow her. Although she had written the papers in code, so they wouldn't be able to use the information, they would track her down and force her to tell them what they needed.

Kumaran pushed up her sleeve and looked at the biometric tattoos she has inked into her own skin. Her entire body was her research, and they couldn't be allowed to have it. She would enter The Bloodharvest herself, win her way into The Enclave and be out of their reach. Then she could leave the country, return to the ruins and provide biometric tattoos for anyone who needed them.