"When the world fell, I fell with it. When the hunters took control of the Enclaves, I tried to tear them down. Now, I subject myself to their twisted game."

Fog, also known by his real name, Iosif Blatov, is a scavenger in the Garden. His default vambrace power is Smoke Screen. His alternative power is Heal.

Fog is a fearless, resilient scavenger. His toolkit allows him to effectively take down Constructs and cleverly escape the hunter's grasp.

After losing his family in the ruins around Moscow, Iosif Blatov joined Tabula Rasa: a group dedicated to the destruction of The Enclaves and the rebuilding of society. Now an expert Scavenger, he gains entry into Enclaves under false identities, strikes blows against the Hunters from within and melts back into the ruins, before moving to another Enclave to start again.

Iosif Blatov left the tent, eyes glassy, letting the flap fall behind him. His son was dead. Gone to be with his wife, who had left them a few months before. Disease and malnutrition had taken his whole family, everything he loved, and he now had nothing left.

Over the next few weeks, he moved from settlement to settlement, doing odd-jobs for scraps of food, never wanting to stay long, to see the faces of those around him. The drawn, gray faces that reminded him of his beloveds.

One night, laying next to the fire, he was joined by a stranger, who glanced around the camp, before his eyes settled on Iosif.

"You look like a man who has little to live for," said the stranger, sitting down next to Iosif.

"Who does?" Iosif replied.

The stranger leaned in. "Terrible, isn't it? Would you like to change it?"

With nothing to lose, Iosif Blatov listened to the stranger's tale. He was part of a group who wanted to make the world better, to bring down the whole structure of society - The Enclaves, The Bloodharvest, and especially the Hunters - and start afresh.

Iosif had heard whispers of this group: Tabula Rasa. The Firms called them 'Leeches', saying they only wanted to steal resources, without contributing to society. But the only way to enter an Enclave was by participating in The Bloodharvest - what kind of contribution was that? If all that was needed was a blood sacrifice, surely many people, Iosif included, had already paid that price?

The stranger finished his proposal, and Iosif Blatov only took a moment to think it over. What did he have to lose? If there was a chance that he could make the world better, to ensure that others would be spared this life, why would he not? 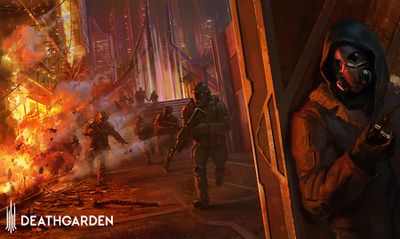 Over the next few months, Tabula Rasa trained him, strengthening his body and sharpening his mind, making him an expert Scavenger, so that he could enter an Enclave in the quickest time possible. He learned skills that would enable him to make guerrilla attacks on those[Enclaves, and they taught him how to escape back into the ruins when the job was done.

With this knowledge, and a fire burning within him, he has become one of Tabula Rasa's most valued operatives. He moves from Enclave to Enclave, passing quickly through their Complexes, striking blows from within and then melting back into the ruins.

He has changed identity many times, so that every time he enters The Bloodharvest, he does it as a fresh recruit - a blank slate.